July 24, 2019
OK, what I am about to write here could be seen in some quarters as sacrilege, or, in others, a sophisticated and convoluted means of aiming a wrecking ball at my own credibility. I assure anyone who may read this that neither is the case.

In birding circles, while there is an acknowledgement that mistakes can be, and are, made, and that (at least in theory) everyone is always learning, it is also true that it can be a cut-throat world, where honest to goodness errors of judgement can be held against someone, or people go around scared of even offering opinions lest they be proven wrong and this to damage their reputations. Now, reputation is important, to an extent. It's what makes birders go and twitch one's rare bird claims even before seeing documentary evidence or sussing the details out. And I am not advocating that anyone should just decide to throw away a solid reputation out of sheer devilment. But I wonder if it is time that us birders ask the daring question: if protecting a reputation at all costs leads to stunted debate or discussion, then should we be as hung up on it as many of us (I will admit including myself, sometimes) seem to be?

When I was a younger man, in my 20s, I admit to having returned, in my mind, time and again to an idealistic view of a slightly less uptight birding scene, where 'cul de sac' theories, calls from the hip that proved incorrect, mistakes when commenting on someone else's claim and so on wouldn't be held against a birder, particularly if they were known to be more or less competent but even if they were unknown quantities or beginners. Indeed, given that everyone is a beginner at some stage, some leeway should always be given to people in such a position. The reality was ever less Utopian, and I can recall comments where people might have found it amusing if and when I or others dared to poke our heads above the parapet and be proven wrong, even if we admitted our error, or having a genuine enquiry and the tentative beginnings of an identification discussion summarily shut down by some withering remark or other.

The sacrilegious part is this. We all make mistakes, all the time. They may not be very big, we may correct them ourselves most of the time, or, if we don't, we would have had someone else not gotten the right call out there first. Indeed, there are forms of birding where, indirectly, making a 'mistake' is very much the right thing to do. If seawatching with others, for one, I think it is always best to call anything potentially of interest. I doubt I would be alone in preferring to hear about a possible scarce or rare seabird that later transpired to be something altogether commoner having been seen under misleading circumstances than to have had the observer, scared for their reputation, to have kept quiet and thus possibly missing something extraordinary.

Another reason for advocating at least a little more understanding of and openness about genuine mistakes is that each of us knows his or her own mind and thoughts. If nobody else will admit to at least occasional errors or uncertainties, then it can seem a very lonely furrow to plough if one is all too aware of their own 'shortcomings' and not those of others.

I am not advocating making errors purposefully, or throwing any caution to the wind and just calling anything that comes into one's head. By all means, strive to improve and to be precise where possible, just don't demonise the occasional error that slips in for us all. But maybe I'm still just a dreamer, in spite of being far less naive in my middle age...

Popular posts from this blog 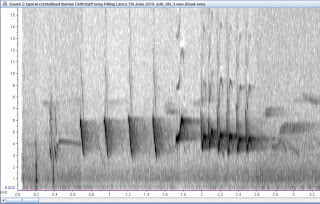 When I visited Spurn back in May, I recall being told that an Iberian Chiffchaff in Lancashire was still lingering. I was unable to divert to the site before getting a train from Preston on my way back, however, and I soon forgot about this bird, assuming that it had departed. I was woken out of this facile assumption, however, on the morning of Monday 3rd June, when I saw a post on social media linking to a blog post about someone having seen the bird the weekend just gone. At that stage, I had made plans to visit my friend Seán Ronayne in Catalunya for the coming weekend, so I started to peruse train and bus timetables online and see if I could divert on my way to Manchester Airport. As this proved feasible, I made the necessary arrangements, and eagerly got a bus from Lancaster to Pilling early on the morning of 7th June.

The bus passed directly by the amenity area where this Iberian Chiffchaff has been holding territory, and, indeed, within 2 minutes or less of being dropped off, I…
Read more 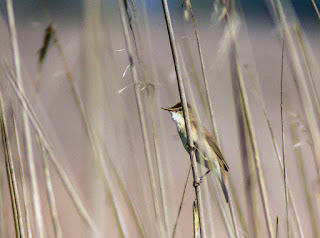 The concept of mimicry within the vocabulary of certain birds is something that is ingrained within most human beings from a very young age. We've all grown up with talking parrots on film and TV, at least, and, beyond that, those who watch wildlife documentaries will know of a few others, especially the rightly famous footage of a Superb Lyrebird captured by BBC cameras some years ago.

In terms of more 'local' birds for those of us living in Europe, those among us who become birders quickly become familiar with a few breeding birds which are quite adept at copying sounds. Common Starlings, for one thing, regularly include mimicry within their otherwise disjointed songs: given that mynas are starlings, this is hardly too surprising. Marsh Warbler, also, is famous for its mimicry, to the extent that, in areas where this species is scarce to rare and Reed Warblers are common, any mimetic unstreaked Acrocephalus will attract attention. And Marsh Warblers are extremely mimetic,…
Read more

Harry
Keen birder based in Cork, prone to wandering elsewhere on the island from time to time and also abroad whenever funds and time allow, particularly within the Western Palearctic. Rather too keen on gulls for my own good!